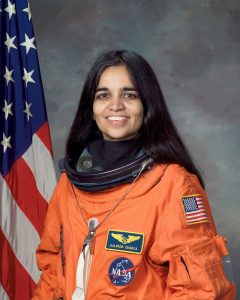 Kalpana Chawla has been an immortal name amongst us, we all remember her for the great thing she did in her life, she was born 42 years ago and she also died during her research. That was a piece of heart-rending news, the whole world was in grief. She had a great interest in space studies and an unconventional dreamer. She also belonged to a family of refugees who later settled in karnal after the partition of 1947. she died when she was just 41 years old. (2003)

She was born on March 17, 1962, in Haryana, she is also the first Indo-American to go to space. In her childhood, she lived in India and was inspired by the Indian’s first pilot- JRD Tata. She would always dream of flying, she did her schooling in Karnal’s Tagore school in Punjab and later she dealt with the studies of Aeronautical Engineering from Punjab. She later moved to America to do bigger things in life.

She married a man called Pierre Harrison, a freelance flying instructor. She also took great interest in flying. Gliding, travelling and reading. She was a strict vegetarian and an avid reader.

Kalpana Chawla joined the NASA program in 1994, and she began with her first mission to space on November 19, 1997, as a part of 6 astronaut crew on space shuttle Columbia flight STS-87.

Kalpana Chawla remains a shining example of how passion, dedication and the love for what you do can take you to skies, though she died, she could leave her imprints on people. Her dreams are those we remember her for, her innovation, her dreams, and determination is the attributes we salute her for.