“In a gentle way, you can shake the world” – Mahatma Gandhi. 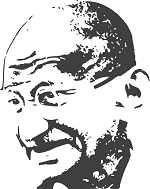 Rabindra Nath Tagore called Gandhi – Mahatma. The term- ‘Mahatma’ refers to great soul. Mahatma Gandhi is undoubtedly the epitome of greatness and simplicity. Gandhi isn’t just a name, but an abstract now. An adjective. He was born on 2nd October, 1869 in Porbandar, Gujarat. He was married to Kasturba when he was very young. He was studying law in England, only when he was eighteen years old. He was a well educated man of high principles. He was a simple looking man with average looks and high morales. He was against the unfair hierarchy of caste system in India, according to him, it decided humanity, mare it weaker. And a fragile humanity couldn’t be enough for sustenance.

Gandhi’s ideas stand as pillars of prosperity. His firm stand on non violence makes him an exemplary example from people from even far across this land to remember him.

He highlighted the ideas of Ahimsa, and giving up on arms. He believed that warfare could never really solve a problem, rather create more. He believed in using disobedience as his weapon, his silence an instrument for winning what he wanted. To free india from oppression of British Colonials and erase the ailments from the rudimentaries of society.

He detested the idea of calling the deprived tribe of the society untouchable. He rather called them Harijans, the jana of Hari, The God. He wanted them to indulge in the collective cry against perpetual oppression. His idea of Self reliance, influences the nation even today. The idea is to make civilization self reliant and not dependent on others.

When he was practising law in the British colonies of South Africa, he was subjected to stringent discrimination and humiliation for the color of skin. He evolved as a man asking justice even from there.

He has been an unforgettable figure and specially when it comes to reminiscing about the times of the struggle for freedom. He was the man to come up with the idea of passive revolt, he decided on changing the world, not through his actions but his passivity. And passivity in itself turned out to be a strong action. He inspired masses to revolt against oppressors and made them a part of Kheda movement, Dandi March, Salt Satyagraha, Quit India Movement, Civil Disobedience movement etc. To say, he was the man who guided population to the road towards independence. He was a great freedom fighter with his own way of fighting, in silence.

Gandhi also describes his life in his autobiography, my experiments with truth.

Though a few people were unsupportive of his ideas, his stand on moderating between Hindu and Muslim was often condemned. He was shot by Nathu Ram Godse on 30th January, 1948. His last words were hey raam. Gandhi was shot, but he never died, he’s alive with us. Through his ideas, through his works.

I hope, you like this essay (essay on Mahatma Gandhi) please share it with your friends and family.