1. Introduction- R.B Tagore
2. His life- His works
3. Tagore as a nationalist
4. Conclusion of the Essay 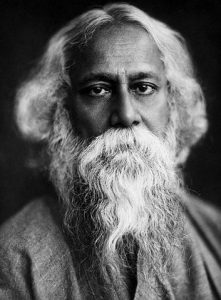 He was born to a high-class Brahmin family in Calcutta on May 7, 1861. He was the son of Debendranath Tagore and Sarada Devi. Only when he was sixteen, he had written a lot of poems and songs; he is popularly known for his poetry- Gitanjali. He was awarded a Nobel prize for the same. He was the first Indian laureate to win the Nobel prize. He has Sahitya Akademi on his royalty. He did a lot of work in India for academic advancements.

His Life- His works

Rabindranath Tagore was inherently born with art in himself, he wrote very beautifully, he was a lyricist, a dramatist, a painter, a philosopher, a revolutionary. For his higher studies, he went to England for pursuing law, and when he got back to India, he had decided to work towards arts. So he wrote a lot of things, and still, his writings are seen as an exemplary example of Indian culture and mixed tradition knitted in art forms of written word and paintings.

Rabindranath was a lyricist too, we all must be familiar with the fascination of Rabindrasangeet; it rises from his name, from his works. He wrote covering vast topics of god, spirituality, society, women, and men. There were phases in his writing too. He was initially writing to god, and in his later life, he wrote about the society, as the critique of the things around him.

Tagore as a nationalist

Tagore was an also a nationalist; he used his pen to express his plight about the Indian society, he was the one to name mahatma Gandhi as mahatma, he and Gandhi were associates and synced with a lot of ideas. Amar sonar Bangla’ the current national anthem of Bangladesh was composed by Rabindra Nath Tagore. Similarly, India’s national anthem- Jan Gan Man is also composed by Rabindranath Tagore. His art, his writing could bring people together; they all resonated together and worked towards India along with him and the other nationalists.

Rabindranath Tagore is a name, that is remarkable, unforgettable and has very many dimensions to it, many saw him as a nationalist, many as a scholar, many as a writer and a lyricist. He was a multi-talented person who is still immortal with us due to his ability to weave magic through words.