To the Respected Principal, teachers, and dear friends, I am glad for this given opportunity. I would like to deliver my thoughts and understanding of Dr. Kalam Sir’s persona through this speech. I am so proud to be born in a country where he was, in India. He must have been a citizen like us and he eventually became a great personality, even more than that. 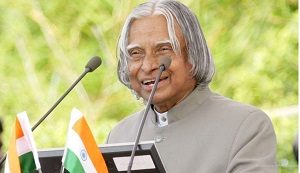 Dr. APJ Abdul Kalam is also called as the missile man of India. He was born on October, 15, the Year 1931 in Rameswaram, Tamil Nadu. He was also called as the people’s president, he was the eleventh president of India. He served the nation as a president from 2002 to 2007. He worked with organizations like DRDO (Defence Research and Development Organization) and ISRO (Indian Space Research and Development Organization).

He was a student of Physics and aerospace engineering. He is still looked upon as a pinnacle of scientific discoveries, the Indian students worship him for his dedication, nobility, and ingenuity. It is rare to find a man like Dr. APJ Abdul Kalam, his ideas inspire the youth of India. He worked towards making India a better land and had aspirations about it. It would be so great on behalf of us to do something, make the nation proud and similarly fulfil his aspirations of the dream-like India he imagined.

He was a man of dreams and the man who inspires one to dream, his idea about dreaming is an impressive one. He says, dreams are not those that we see while we sleep, but those that don’t let one sleep. Isn’t that true, that to fulfil one’s dream, one needs to work hard, burn the midnight lamp’s oil and not simply think about it? He would encourage people to become people of action, rather than just dreamers. His ideas are pragmatic and noble, and if one successfully inculcates them in his/her life, nothing can stop him/her from achieving his/her goals.

Well while talking about how APJ Abdul Kalam influences us, let’s also find out who inspired him throughout his life. The first one was his teacher- Iyadurai Solomon and the second one- Dr. Vikram Sarabhai.

In the year, 1997 Dr. APJ Abdul Kalam received the highest civilian award Bharat Ratna. Anyway, what causes us the major grief is his demise, while he was delivering a speech in Institute of Management, Shillong, he collapsed and left us. It was a sad day in the timeline of India’s history. He passed away on July, 27, the year 2015, aged 83.

Though he left us, he is still alive in our hearts as a source of inspiration to all the dreamers of India. He was a man of high stature and value, we all should dream like him and transform the pictures of our lives, our nation, just like him.

Thank you for being patient listeners.

Hope you loved this article. Your love and support is my motivation. Thank you so much my dear students. – Aditya sir